The Community started a new mission called “Fire and Hope” in late April for young adults between ages 18-25 years. It’s aim is to provide formation for young people to be missionaries in the world. Every month there is a youth mass followed by a time of praise and a teaching on some aspect of mission, then there will be a chance to put that into practise by  linking onto the Community Street Evangelisation missions the week after. Previous topics have included “Love begins at Home”, “Set out into the Deep” and “The Thirst for Souls.

The following article featured in Sydney’s Catholic Weekly in May 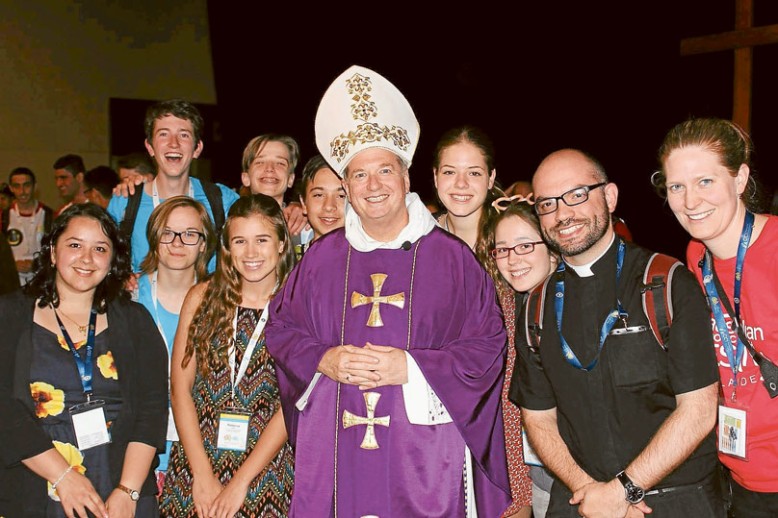 Archbishop Anthony Fisher OP with youth of the Emmnanuel Community and Sydney priest Fr Josh Miechels, who first discerned his calling to the priesthood through the Community. PHOTO: Supplied

‘Fire and Hope’ is an exciting new initiative seeking to form young Catholics as missionary disciples and evangelisers in today’s world.

Run by the Emmanuel Community, ‘Fire and Hope’ is a mission for young adults aged 18 to 25, consisting of monthly Masses, Eucharistic adoration, praise, talks and social time.

Held on the third Sunday of each month at St Anne’s Church in Strathfield South, each gathering will begin with a youth Mass at 4pm, followed by praise and a teaching and then sharing groups, and finishing up around 6.15pm with dinner.

There will also be an opportunity for Eucharistic adoration prior to Mass.

The Emmanuel Community is an international public association of the faithful, which is recognised by the Catholic Church and is therefore able to act in the name of the Church.

The essence of the Emmanuel Community is that it is a path to holiness in today’s world. Members include lay people – married or single – and priests as well as consecrated men and women living celibate lives and sharing the common call to strive for holiness through Eucharistic adoration and daily Mass.

Members seek to grow in compassion towards those who don’t know Jesus and in the desire to evangelise.

They are called to live in the world as people of joy and simplicity, without being of the world.

The vision for the ‘Fire and Hope’ mission is that through prayer, praise and mission, young people will be formed as forces of evangelisation in the modern world. All interested young adults are invited to attend.

For more information please go to www.facebook.com/fireandhope/ or email emmanuelyouthsydney@gmail.com