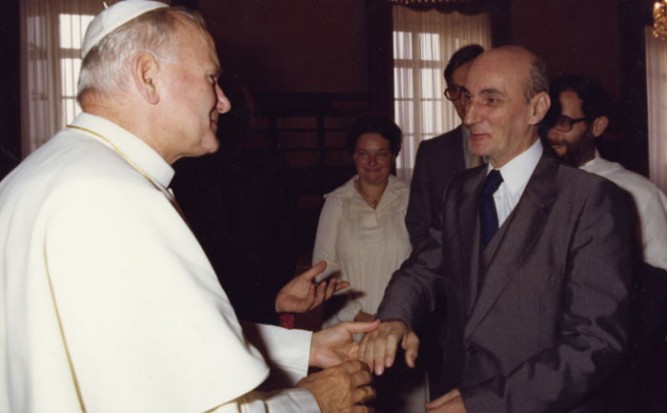 Pierre Goursat along with Martine Laffitte-Catta founded the Emmanuel Community in 1976.

Born in Paris, France in August 15, 1914,  he lived a humble life and grew up with his mother after his parents separated early in his life. His conversion happened when he was 19 years old, while he was undergoing treatment for tuberculosis. One day, he suddenly realised that he had stopped thinking about his brother Bernard, who was two years younger than him and who had died suddenly at the age of ten. It was as if his younger brother were telling him: “You do not think of me anymore because your heart has become hard; you have become proud.” Pierre fell on his knees at the foot of his sick-bed and at this moment he met Christ in a way that gave light to his whole life. Afterwards, he modified his way of living, filled with art and refinement. He decided to deepen his faith, to pray and to evangelise.

He battled with tuberculosis from which he was healed in 1944 in Lourdes, attributing his healing to the Virgin Mary. Even after his healing he battled poor health all his life.

In 1972 he met the Renewal and the Holy Spirit became his guide in everything. From this encounter started the prayer groups and followed the birth of the Emmanuel Community. For the next thirteen years Pierre worked as the leader of the new Community, helping people, forming them and offering his witness of purity, charity, faithfulness and humor through his attitude in establishing the Emmanuel.

Once he had stepped down, Pierre drew back from the scene and trusted in his successor. He continued to help the Council of the Community but very discreetly. Two rooms in the Emmanuel Community headquarters in Paris were fitted out for him and he lived there during his last years.

In his last year he prayed night and day saying, “The Holy Spirit discharged me from everything and told me, “All you have to do is pray.” That’s beautiful!”

Pierre died in the morning of March 25, 1991, both the feast of the Annunciation and Monday of Holy Week. After the funeral in Paris he was buried in Paray-le-Monial, France.

With the agreement of Cardinal André XXIII, Archbishop of Paris, the cause for the canonization of Pierre Goursat was introduced in January 2010 and on December 2015 the Diocesan Phase was officially closed at a ceremony in the church of the Holy Trinity in Paris.

In the Roman Phase, the case will be examined by an expert commission of the Congregation for the Causes of Saints and then by the Cardinals, and if they agree, the Pope should be able to recognize the heroic virtues of Pierre Goursat so that he may be declared Venerable. Thereafter, the account of a miracle will need to be presented so that he might be declared Blessed, and then a second miracle will be needed for him to be proclaimed a Saint.

PRAYER FOR THE BEATIFICATION OF PIERRE GOURSAT

Lord Jesus,
We pray for the beatification of Pierre Goursat.
Inspired by a fervent desire for the salvation of souls and a great love for the Church, he worked with faith and hope for the Church’s spiritual and apostolic renewal. Lord, through his intercession, grant us the grace of trusting you fully, serving you generously and doing your will.

Give us a heart which is open to adoration and overflowing with compassion for all people. Set us ablaze with fire and love for the evangelisation of the world.

Lord, through the intercession of the Servant of God Pierre Goursat, we ask you with insistence to grant many favours to all of our brothers and sisters in humanity, especially the poor and those wounded by life. Lord, console the afflicted, strengthen the weak, heal the sick! In a particular way, we entrust to you…

Lord Jesus, to those who are far from you or who do not yet know you, we ask you to reveal the infinite love of your meek and gentle Heart.